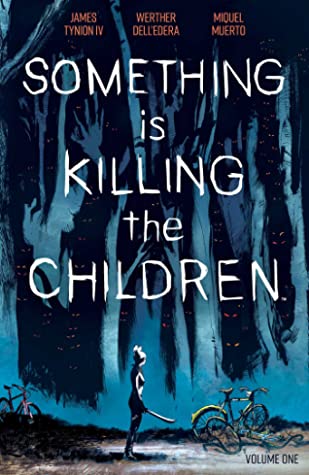 Something Is Killing the Children is a new series from BOOM! Studios written by James Tynion IV and drawn Werther Dell’Edera, with Miguel Muerto on colors. This first volume of the series finds a small town plagued by a number of missing and murdered children. Not great! When one kid named James does return, the police don’t believe his gruesome story of monsters in the woods being responsible for the dismemberment of his friends. The mystery escalates when a woman going by Erica Slaughter shows up in town, saying she believes James and that she’s come to take care of the problem.

Something Is Killing the Children is told through the eyes of several characters. The aforementioned James, Erica Slaughter, and a member of the town named Tommy, whose sister is among the missing children. James seems to be loosely based on Tynion himself, based on his name, appearance, and what I know of Tynion. One of the problems with using this many narrators in what is a relatively short amount of page space (just 120 pages of actual story-telling) is that I never felt like we got a good window into any of them. There’s a lot of setup being done for future volumes here, but it leaves the story in this first volume feeling a bit incomplete. I was half-way invested in everybody but fully invested in nobody.

The most compelling character is probably Erica Slaughter. While I’m sure her name is meant to be on the nose, it’s still a bit eye-roll worthy. She’s in the Van Helsing/Elsa Bloodstone monster-slayer mold. There’s some mystery built in about her benefactor, but I think I’d have found her story more compelling had we been left to wander more about who exactly she is and how she knows what she knows.

The layout of the book is a bit of a departure from the norm. Tynion uses a ton of two-page spreads for stacking long panels full of dialogue, instead of using them as traditional splash pages. I liked it, but it does make reading on digital platforms a bit more work. The story otherwise flows well and is quickly paced, which is a thing I’ve had some problems with when reading some of Tynion’s previous work.

This is the first time I’ve read a book drawn by Werther Dell’Edera. It’s always nice to see new artists. My best description of Dell’Edera’s line work is messy. That probably sounds like a criticism but it’s more just a stylistic choice. It works here, especially in some of the more grotesque moments. His work in chapter five here was probably the highlight of the book and Miguel Muerto found the sweet spot on colors. I’d like to see more work from both of them.

This first volume of Something Is Killing the Children shows a bit of promise but ultimately fails to deliver a totally satisfactory story. I’m sure there will be more revealed in future volumes, but I don’t know that what I read here was interesting enough for me to keep going. It’s short and pretty breezy, so if you are a big fan of horror it might be worth your effort.