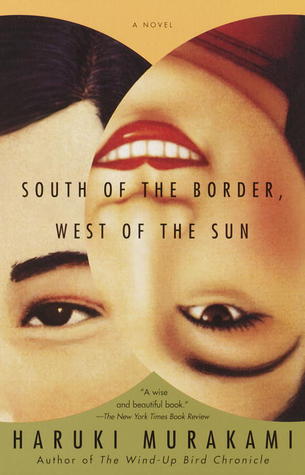 South of the Border, West of the Sun is one of the most famous works from the acclaimed Japanese writer Haruki Murakami. It is the shortest book that I have read from Murakami, at just over 200 pages. South of the Border tells the story of a man named Hajime. Murakami tracks Hajime’s life from a childhood love through adolescence and then through middle-age, which finds him married with two children. At the heart of the book is Hajime’s struggle with never having lost the obsession of his childhood sweetheart, Shimamoto, and the threat this obsession poses to his domestic life when circumstances find her re-enter his life.

As I read more Murakami, it becomes increasingly recognizable that there is little distinction between his characters’ (more specifically male characters) mannerisms and motivations. You could replace Hajime with Toru Okada from The Wind-Up Bird Chronicle or Tengo from 1Q84 and the story would remain coherent. This tendency ends up serving as both a blessing and a curse. On the one hand, it makes reading Murakami quite comfortable. You go in knowing what to expect and understanding the language of the world. At the same time, it does lead to a bit of repetition when the heart of most of Murakami’s stories are about very similar middle-aged men dealing with internal or external threats to their current domestic situation. It’s not hard to imagine Murakami’s male characters as semi-autobiographical, his avatars in the worlds he’s building.

In addition to familiar feeling characters, fans of Murakami are sure to recognize the the most prominent themes in South of the Border. There’s plenty of mention of classical and jazz music. There’s also love, obsession, sex, and infidelity. Murakami’s work always feature sex prominently and South of the Border, West of the Sun is no exception. It’s always described frankly. Absent is the flowery and romanticized idea of sex one might expect from a romance or fantasy novel. I can see Murakami’s ideas and descriptions of sexuality off-putting and uncomfortable, but it has always felt more recognizable to me.

It’s interesting just how little time is spent exploring the relationships between Hajime and his family. There is some space devoted to Hajime and Yukiko (his wife) coping with their slowly breaking marriage, but Hajime’s life at home is something that the character spends much time in the book thinking about and fretting over, with little in the way of actual interaction. It undercut the idea that Hajime is so concerned with his family when most of the members were ancillary characters here.

One way that South of the Border does differ from other Murakami works I’ve read is that it is the first that is straightforward fiction. While his books are often outright fantasy (Hard-Boiled Wonderland and the End of the World) or at least contain some magical realism (The Wind-Up Bird Chronicle), South of the Border is just about a man who is trying to reconcile his current life with the allure of Shimamoto. While I did enjoy South of the Border, my penchant for enjoying fantasy probably helped lead to my feeling that it fell short of some of Murukami’s other work.

South of the Border, West of the Sun is sure to feel like home for those that enjoy Haruki Murakami. While I don’t think it reaches the same heights as some of his other books I’ve read, I still found it enjoyable. For those who haven’t had any previous exposure to Murakami, I think I’d suggest reading one of the other stories I’ve referenced in my review first, though this being the shortest by far may be a reduced barrier to entry for those who are new.

One thought on “Book Review – South of the Border, West of the Sun by Haruki Murakami”