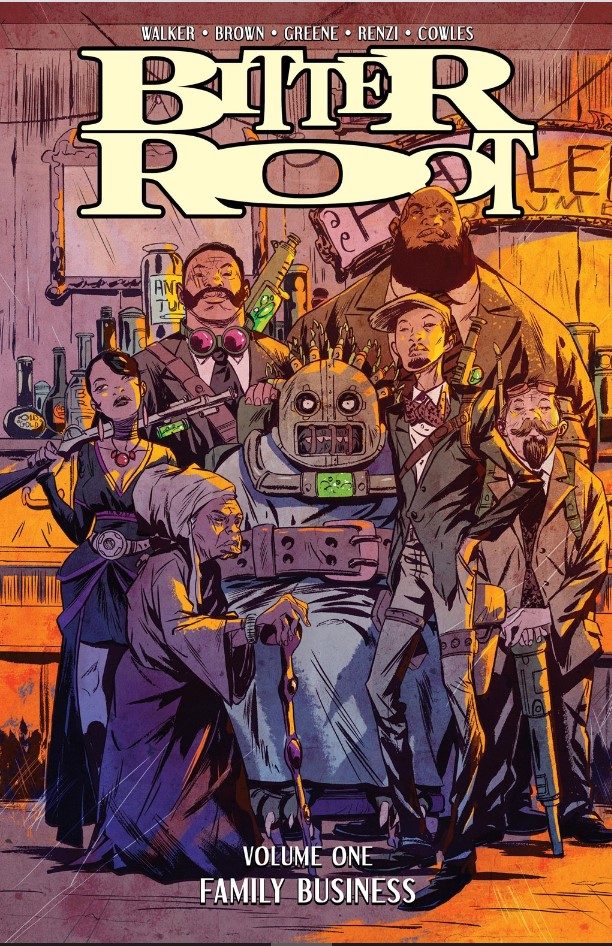 As part of an effort to boost Black voices in the comics and book community, I’m trying to mostly only read works by Black writers and artists for the month of June. This time I pulled down one I’ve been looking forward to for a while. Bitter Root, Vol. 1 collects the first 5 issues of the series written by David F. Walker and Chuck Brown and drawn by Sanford Greene. A sci-fi/horror series about a family of Black monster hunters living in 1920’s Harlem, it felt like a natural fit to read this month. This isn’t the first time Walker and Greene have teamed up. I remember fondly their work on a run of Power Man and Iron Fist over at Marvel about 4 years ago.

The Sangeryes are the aforementioned family of monster hunters. Their family business is to hunt Jinoo, which are humans humans whose souls have been corrupted and turned into monsters. The Sangeryes family holds the secret to purifying Jinoo using their serum concocted from the titular Fif’no root. This time around, the family is facing a threat from more than just your run-of-the-mill Jinoo. While the premise sounds like fairly standard horror/sci-fi material, what sets it apart is the book’s focus on tackling racism and Black history through a genre lens.

I’m often guilty of focusing too much on the written portion of comics at the expense of the art. Not this time. David Walker and Chuck Brown have spun a fine yarn, to be sure, but Sanford Greene is putting in some absolute work in Bitter Root. His Harlem is both gritty and full of life. The steampunk aesthetic of a group of early twentieth-century monster hunters is quite imaginative. The action sequences and fights with the Jinoo are pitch perfect. The colors by Greene and Rico Renzi are well done. The sci-fi elements and monsters are vibrant against the muted backdrop and buildings of Harlem. Bitter Root is a visual treat.

As a sci-fi/horror blend, Bitter Root is very effective. It’s setting and style make for a unique series. That’s always refreshing in the never-ending wave of repetition that can sometimes plague the comics medium. The book is heavy on the action. I felt like the story was pretty fleshed out, but it’s quickly paced and there’s a generous serving of splash pages. I think I might have had more issue with how the plot unfolded had I not known going in that there was more Bitter Root on the horizon. It works well as a standalone, but working with the knowledge that some of the unexplored threads are likely to be covered further down the road was comforting.

Bitter Root is steeped in Black history. Taking place in 1920’s Harlem lends itself well to that effort, but the writers also make the Red Summer of 1919 and the Tulsa massacre in 1921 central to the story. The book expects that you’ll have already learned about these events or will be curious enough to research them on your own. Seeing as our educational system often ignores these important events in US history, you may have missed them, but I think they were given the right amount of weight in Bitter Root. A full historical re-telling would have felt forced, but weaving them into the story is sure to introduce them to some for the first time.

My favorite character here was Berg. He’s got real Beast from the X-men vibes. He’s a whip smart doctor that uses a never-ending parade of large words from his vast vocabulary. When it comes time to throw-down though, Berg isn’t afraid to get his hands dirty. There are further, more spoiler-y similarities with Beast too, but I’ll leave you to find those out on your own. The rest of the cast is pretty well-built out too. Ma Etta, the family matriarch, even gets to tangle with some Jinoo. I will admit I’d have liked to see more time spent on Blink. There’s a bit of her primary character motivations teased, but I think the action got in the way of spending more time on those themes in volume one. I’m hoping there will be more exploration in that vein in further volumes.

This first volume has a ton of high-quality back-matter. I don’t typically spend a ton of time on back-matter, but Bitter Root’s was worth exploring. Firstly, the collection has all of the variant covers from a group of absolute all-stars, including Bill Sienkiewicz, Mike Mignola, and more. The covers are cool but also included are quotes from famous Black writers like Toni Morrison and James Baldwin set to page against Greene’s early character sketches. Then there’s essays from Black academics exploring some of the folklore and themes that helped influence the creation of Bitter Root (including the coining of the great term “EthnoGothic”). The back-matter alone might be worth the price of admission.

All told, Bitter Root is first and foremost just a good comic. It’s written well and the art is stellar. Beyond that, it exists as a commentary on racism by Black creators in a time where that feels more essential than ever. To pull off that balance of story and symbolism is no small feat. It’s no wonder this series was recently nominated for the Eisner for best continuing series. I can’t wait to read more.