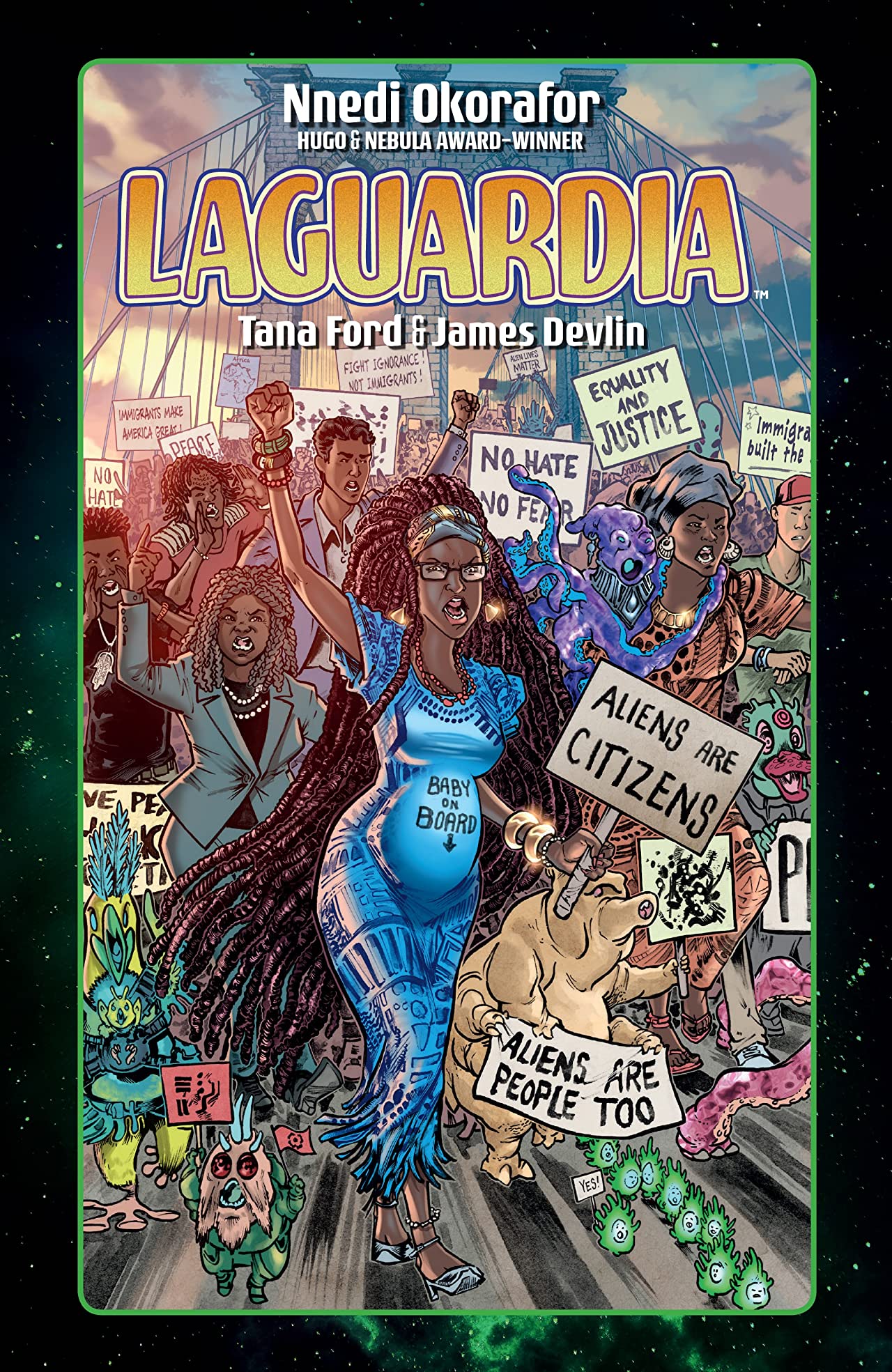 LaGuardia is a 4-issue series written by Hugo award winning author Nnedi Okorafor with art by Tana Ford. The series is part of the Berger Books imprint at Dark Horse that’s run by legendary former Vertigo editor Karen Berger. Taking place an indeterminate amount of time in the future, LaGuardia finds an Earth where aliens are now integrated with human society. Future, a pregnant Nigerian-American doctor, is returning home to New York City after several years living in Lagos, Nigeria. Future’s stated reason for returning home is to raise her child at home in America, but some mystery surrounds Citizen, the father of her child, and the sentient illegal plant named Letme Live that Future has smuggled into the United States.

Okorafor tackles racism and xenophobia in LaGuardia by turning it on its head. Humans have begun to mix genetically with aliens, through things like transplants and limb replacements, much to the chagrin of many among the population. A large portion of the plot surrounds a newly implemented travel ban imposed by the United States government. Rather than banning citizens from different countries, the story finds the United States banning entry to all alien entities and humans whose DNA has been mixed with aliens genetically. Instead of an immigration story about “illegal aliens”, Okorafor mirrors the same nationalist, xenophobic policies by applying them to literal aliens in a science fiction future. Okorafor utilizes the narrative tool effectively by using it to tell a story about racism where Black people aren’t the primary target of said racism.

The cast of LaGuardia is quite diverse. The majority of the characters featured here are Black and hail from a number of countries, ranging from the United States, Nigeria, and Sudan. Future lives in a building that features people and aliens from all walks of life and heritages. Equating aliens with illegal aliens may be a bit on-the-nose, but it nonetheless rings true. It’s not hard to imagine Okorafor’s perceived future here where there may be less overt racism towards one group of humans, but only because that sense of xenophobia has been displaced by an “Other” that is perceived to be an even larger threat. Given the entirety of human history, humanity seeking to permanently differentiate themselves from their newfound neighbors is completely believable.

I was a bit familiar with Tana Ford from her previous work at Marvel. Her style was well suited for this story. Ford excelled in her depiction of the various alien species, including my favorite named Payment, a giraffe-like bipedal alien that lives in Future’s building. James Devin’s colors help Ford establish a vibrant cast of alien characters. The species resemble flora, fauna, and any number of things in-between. My favorite visual from the series is the ever-changing, sprawling nature of Letme Live’s growth. I enjoyed the depiction of the not-too-distant future technological developments like self-storing suitcases and self-driving cars, as well.

While LaGuardia is ostensibly about racism, it’s also still a creative work of science fiction. Too often, this kind of story would focus on first contact with an alien invader. Instead, we are taken further into the future where humans and aliens have begun to cohabitate. The exploration of that dynamic was well done and leads me to my only real beef with the book: It was too short! The issues are longer than most 20-24 page comics that hit the stands today, but I felt like there was quite a bit of story condensed into a small amount of page space. I would have really liked to see further expansion on the developments in issues 3 and 4. The ending is satisfying, but I think taking more time to get there would have benefited the series. Perhaps we’ll get more someday, but in the meantime I’d recommend LaGuardia to any fan of science fiction, good comics, or Okorafor’s previous work.