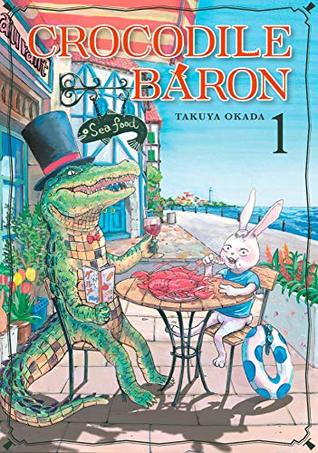 This was absolutely bonkers. Usually I start a review by giving a brief synopsis of what the book is about, but I felt this one warranted a bit of commentary first. Crocodile Baron is a manga about a talking, high-class crocodile novelist who is always on the search for the finest culinary treats that Japan has to offer. Donning his top hat, with his side-kick, Rabbit, in-tow, Crocodile departs to a new area of Japan in each chapter after hearing about the best place to get Japanese favorites like Udon or Takoyaki. If that sounds like a pretty crazy premise for a book, it’s only because it absolutely is.

Now that I’ve prefaced my review by introducing the sheer incredulity of this book, I have to say that I found it fairly enjoyable. There is something about manga that allows series to exist with the most outlandish foundation. This isn’t to say that Western comics don’t have their fair share of strange series. There are certainly off-the-wall comics that make it to store shelves, but manga doesn’t have the same deep-rooted ties to “you should take this seriously” superhero books or mature focused independent titles that allows for a more eclectic collection of series to make it to press. Crocodile Baron is certainly a good example of that.

Each chapter of Crocodile Baron mostly focuses on Crocodile and Rabbit on the hunt for a new culinary specialty. The cadence of the series is pretty well established within the first two chapters. The basic formula goes something like this: 1. Crocodile and Rabbit hear about a place that has the best (insert food here) in Japan. 2. The pair journey to the restaurant to enjoy said food. 3. There is some event that triggers Crocodile’s feral roots, causing him to destroy some portion of the restaurant or save the pair from some threat. 4. Crocodile apologizes profusely to the store owner and the two go on their way. While it’s formulaic, that doesn’t mean it fails to land. The gags are so over-the-top but played straight enough that I found myself laughing. I get the sense that if I were to continue reading the additional volumes in this series, the formula might get tiresome fairly quickly.

While the conceit of the book may sound like it’s suited for more of a cartoonish, gag-manga art style, it’s really fairly traditional for the medium. This helps lends to the general sense of ridiculousness. If you pressed me for a recommendation, I’d say this one is probably suitable for all-ages. It’s weirdness lies more in the pervasive strangeness of anthropomorphic animals seeking out traditional Japanese meals than any mature themes. Having said that, it does feel like some of the comedy might be lost on younger readers. It’s probably somewhere on the border of all-ages and something more appropriate for young adults and up.

I enjoyed Crocodile Baron enough as a one-off affair. It’s a quick read and I got some laughs out of it. I think if I were to continue with the series I’d definitely be on the lookout for some increased diversity in the formulaic story-telling in each chapter. It works pretty well but more than one volume would definitely get repetitive. I’m not sure what cross-section of people I’d recommend this to. There are better gag-manga series out there for those who are fans of the genre and it doesn’t feel like a particularly good entry-point for anyone young or old looking to get into manga for the first time. But it’s certainly not the worst thing I’ve ever read, so if it sounds interesting I guess I’d say give it a shot.