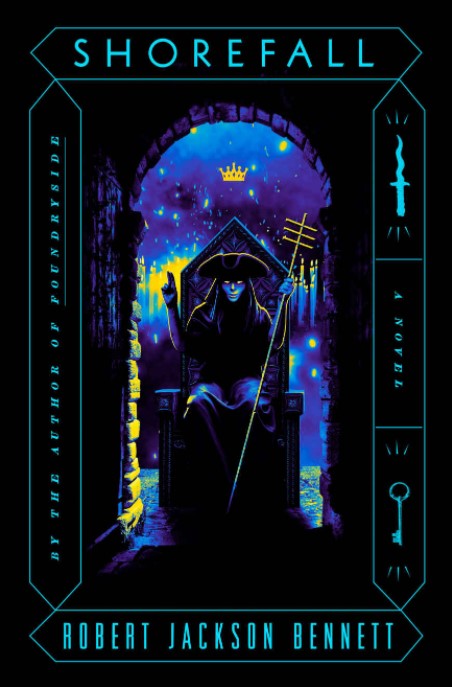 Shorefall is the second book in The Founders Trilogy by Robert Jackson Bennett. I had a good time reading the first entry, Foundryside, when it was released in 2018 and I’ve been eagerly anticipating this follow-up. One of the hallmarks of the series so far is Bennett’s focus on building a rich world with a fully fleshed out system of magical objects. Foundryside left the main character, Sancia, and her crew of friends ready to open their own scriving company. Shorefall picks up three years after the events of Foundryside and brings back the same cast.

It took me a while to remember and get back into the lingo of the book. From scriving, to foundries, to merchant houses, I had to go back and read a summary of Foundryside a few times before I got the lay of the land again. Bennett drops you right back in Tevanne with little preamble. I’m usually a fan of the “pick up right where we left off and assume the reader remembers the ropes” writing method for sequels, but given the richness and density of the world Bennett has crafted, it made things a bit muddied at the start. It’s been probably 18 months since I read Foundryside and I think a re-read before diving in to Shorefall would have done me a lot of good clearing things up from the jump.

After getting through the initial disorientation and refreshing, Shorefall does provide Bennett with the ability to really jump right into a story with new threats and higher stakes. So much of the first book was about world building and laying the groundwork for the reader’s understanding of how this rich and complex world operates. Now that Bennett has that leg work done, he’s free to dedicate more time to plot and less to building. The threats that are presented to Sancia, Gregor, and the rest of Foundryside seem much more serious than in the first book in the series. This is mostly true of any good sequel but Bennett does effectively pull it off in Shorefall. The stakes seem higher for everyone involved.

Even though the world building is mostly complete, Bennett still spills quite a bit of ink introducing new elements to the scriving system. Magical fantasy books seem to mostly fall into one of two camps: Outline and explain a very complex system of magic or wave it away and just make things up as you go. Bennett certainly tilts toward the former end of the spectrum. I enjoy learning about all the intricacies and exploration of scriving, but I can see it being a bit of a turn-off for some readers. If you made it through the first book, it’s certainly about the same level of detail.

The idea of the ancient scrivers is one that was teased in the first novel. It was pretty clear that this history of powerful beings is one that would play a bigger part in the overall narrative and it doesn’t take long for that to become even more apparent in Shorefall. The new villain in the form of the first hierophant is one that makes the skin crawl. It’s quite effective to bring the bogeyman to the fore and present an obstacle for Sancia that seems truly insurmountable.

Bennett takes his time getting to the climax. Like the first book, Shorefall is an interesting, but sometimes cumbersome read. The characters do a ton of planning and re-working new scrivings and uncovering new mysteries. Despite that, I stayed invested the whole time through. Bennett makes good use of the idea of twinning to explore the depth of the relationship between Sancia and Baroneese. It’s a good trick to gain more insight into the web of characters while introducing a new plot element that helps push the story forward.

The ending to Shorefall is satisfying and left me ready to read the final book of the trilogy. The twist here is legitimately surprising and felt earned. With Shorefall, Bennett has delivered another good work of magical fantasy. The series is inventive and those who love to read about magical objects and well-thought-out systems of magic will feel at home reading Shorefall. I’m looking to Bennett closing out the trilogy in the next entry.