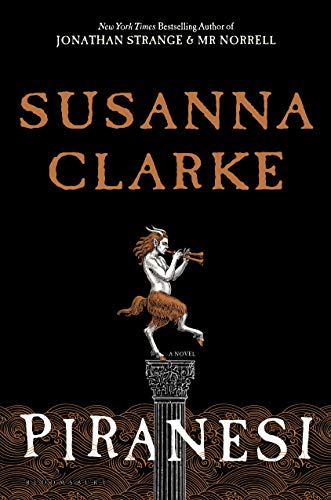 Piranesi is the latest book from best-selling author Susanna Clarke of Jonathan Strange and Mr. Norrell fame. Piranesi is only the third book, and second full length novel, that Clarke has ever had published. It’s also the first book from Clarke in nearly a decade and a half. All of this is to say that when Clarke writes something new, it’s rightfully quite an event in the book world. Clarke brings her trademark brand of fantasy to a new world in Piranesi.

With Piranesi, Clarke thrusts the reader straight into a strange world of unexplained occurrences. There are no traditional elements of fantasy in play, just a twisting of the real world in fantastical ways. Our main character is not given a name and wanders through a house that features thousands of halls. Each hall is filled to the brim with odd occurrences like hundreds of marble statues of satyrs, a woman covered in bees, and other outlandish things. The halls are large enough that they have their own tides and our protagonist, who considers himself to be a man of science, carefully tracks the tides and which halls will be flooded when. There is only one other person living in the house. “The Other” is the designation which our hero (whom The Other calls Piranesi) gives to the man. The Other seems to know more about the world of the house than Piranesi and is someone Piranesi considers to be a mentor and friend.

What Clarke does in Piranesi to establish a sense of fantasy is quite different than most books in the genre. Clarke uses elements that, on their own, are very real parts of our world and don’t take much imagination to envision. Instead, Clarke mashes these elements in a way that is as much mystery as it is fantasy. Piranesi has an intimate understanding of the halls of the house, gained through exploration and documentation, but has almost no understanding of what we’d think of as the real world. Piranesi believes the house to be the whole of the world that exists, and that he and The Other are the only living humans.

Clarke builds such an effective sense of mystery and Piranesi really acts as the avatar for the reader, uncovering new information about the house and The Other as the story unfolds. It’s apparent that there are some ties to what we know as the real world. Piranesi comes across words, like Manchester or Birmingham, that seem like nonsense but drum up primal memories of car horns blasting and the smells and sounds of the city. When Clarke begins dropping these hints, it helps take the story from an intriguing fantasy to something more interesting. The unfolding mystery of who Piranesi really is and how this incredible house is connected to the real world sucked me in. Clarke drops hints sparingly. She isn’t interested in spending time world-building, but rather in dropping breadcrumbs along the way. This method helps prevent the book from feeling bloated, which was one of my few complaints about Jonathan Strange and Mr. Norrell.

The mystery of Piranesi ends up unraveling and being answered in a satisfactory manner. Clarke doesn’t try to explain every nook and cranny of the house, leaving some of the feeling of adventure to linger. More than a decade is a long time to wait between new books from an author, but Clarke remains true to the style that gained her so much acclaim from her debut. Piranesi is a lean, engrossing work of fantastical mystery. If you’re looking for something heavy on world-building you might be disappointed, but the lack thereof amplified the intrigue to me. I enjoyed Piranesi a lot, and here’s hoping that it won’t be another decade before we hear from Clarke again.

One thought on “Book Review – Piranesi by Susanna Clarke”