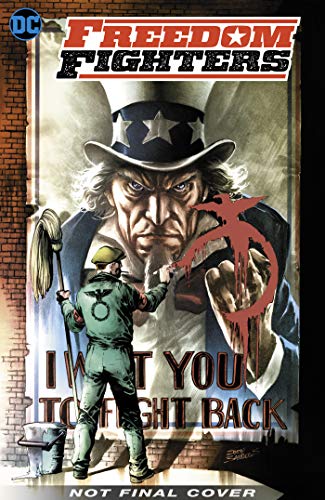 I usually come into these based-on-little-known material event series from DC and Marvel with pretty low expectations because they’re usually awful. Freedom Fighters isn’t awful! It’s actually pretty good. Full disclosure I have read absolutely no previous Freedom Fighters material and you don’t need to before reading this either.

Freedom Fighters imagines a world where the Nazis won and now rule over the United States (and the rest of the world). A crew of super heroes who have been hiding come up with a plan to resurrect the legendary hero Uncle Sam to defeat the Nazis.

The book is the all the appropriate levels of action, humor, and grandiose comic book scenes. There’s even a cognizant social commentary that never feels too heavy handed for a super hero book. Collecting 12 issues, the creative team also got a lot of room to flesh out the story and used it wisely. 6 issues would have been too few but it felt like the series reached a satisfying ending and I think stringing it out would have lessened the overall product.

Robert Venditti has always been someone I’ve felt is a bit underrated as part of the DC stable over the last decade. He’s always solid and has a knack for some creative story-telling, which is on display here. The art team of Eddy Barrows (pencils with Bruno Redondo on a fill in issue), Eber Ferreira (inks), and Adriano Lucas (colors) were on board for most of the full twelve issues and consistently prove up to snuff illustrating the large scope the story entails.

At the risk of sounding too hyperbolic…DC spends so much time focusing on rehashing old plots and looking for the next Watchmen by letting someone else try their hand at the Watchmen they don’t stop to make more books that are creative and substantial like Freedom Fighters. Again, this isn’t the Watchmen, but it’s a good book that’s worth your time that largely isn’t based on anything else in the DC Universe that people will actually be familiar with. I’m pretty well versed in DC history and had never heard of Freedom Fighters before this book. That seems like the kind of place you’re going to find the next good story like Watchmen, not by whatever the hell it was Geoff Johns tried to do in Doomsday Clock.

Freedom Fighters is good, super hero fun that packs a punch and is well illustrated. It’s not going to change your life but it’s a good use of time!